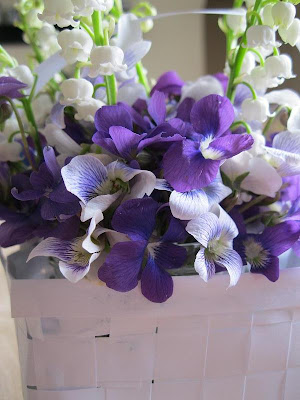 A little May Day basket we put together this morning with violets and lilly of the valley. I found the history of May Day very fasinating. Hope you enjoy it too!


England-Traditional British May Day rites and celebrations include Morris dancing, crowning a May Queen and celebrations involving a Maypole. Much of this tradition derive from the pagan Anglo-Saxon and customs held during "Þrimilci-mōnaþ" (the Old English name for the month of May meaning Month of Three Milkings) along with many Celtic traditions.
May Day has been a traditional day of festivities throughout the centuries. May Day is most associated with towns and villages celebrating springtime fertility and revelry with village fetes and community gatherings. Since the reform of the Catholic Calendar, May 1st is the Feast of St Joseph the Worker, the patron saint of workers. Seeding has been completed by this date and it was convenient to give farm labourers a day off. Perhaps the most significant of the traditions is the Maypole, around which traditional dancers circle with ribbons.

United States-May Day was also celebrated by some early European settlers of the American continent. In some parts of the United States, May Baskets are made. These are small baskets usually filled with flowers or treats and left at someone's doorstep. The giver rings the bell and runs away. The person receiving the basket tries to catch the fleeing giver. If they catch the person, a kiss is exchanged.

Ireland-May Day has been celebrated in Ireland since pagan times as the feast of Bealtaine and in latter times as Mary's day. Traditionally, bonfires were lit to mark the coming of summer and to banish the long nights of winter. Officially Irish May Day holiday is the first Monday in May. Old traditions such as bonfires are no longer widely observed, though the practice still persists in some communities.

Germany-In rural regions of Germany, especially the Harz Mountains, Walpurgisnacht celebrations of pagan origin are traditionally held on the night before May Day, including bonfires and the wrapping of a Maibaum (maypole). Young people use this opportunity to party, while the day itself is used by many families to get some fresh air. Motto: "Tanz in den Mai!" ("Dance into May!").

Finland-Celebrations among the younger generations take place on May Day Eve, see Walpurgis Night in Finland, most prominent being the afternoon 'crowning' of statues in towns around the country with a student cap. May Day is known as Vappu, from the Swedish term. This is a public holiday that is the only carnival-style street festivity in the country. People young and old, particularly students, party outside, picnic and wear caps or other decorative clothing. Some Finns make a special lemonade from lemons, brown sugar, and yeast called "sima". It contains very little alcohol, so even children can drink it. You can also buy a similar product in all stores. Some Finns also make doughnuts and a crisp pastry fried in oil made from a similar, more liquid dough.
Excerpts from Wikipedia
Posted by Heide at ApronHistory at 11:49 AM
Email ThisBlogThis!Share to TwitterShare to FacebookShare to Pinterest