Isn't this a charming apron? I was so excited to happen upon the Etsy shop Indie Sommer which sells reproduction 1930s and 1920s apron patterns. I have not ordered any of the patterns (Yet!) so I can not recommend how the patterns is. But if any of you seamstresses have been looking for lovely vintage apron patterns, here you are!
I like how she shows not only the vintage illustration but also pictures of the apron made up. This pattern looks so simple to put together, I doubt it would take more then an hour.
For more information and details visit Indie Sommer.
﻿
Posted by Heide at ApronHistory at 11:40 AM 5 comments:
Email ThisBlogThis!Share to TwitterShare to FacebookShare to Pinterest
Labels: 1930s, apron pattern, etsy 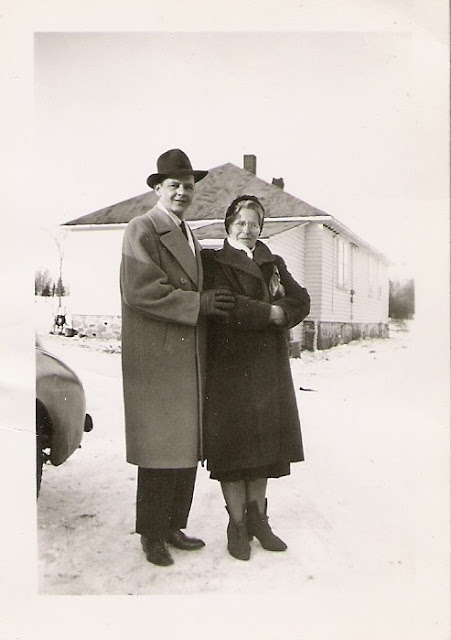 Recently a cousin found this photos among family papers. As they all came in doubles, she gladly passed copies on to us. This is my Grandpa with his mother Great-Grandma Anna. We did a bit of thinking and figuring and think these were taken just before he was drafted in 1941. 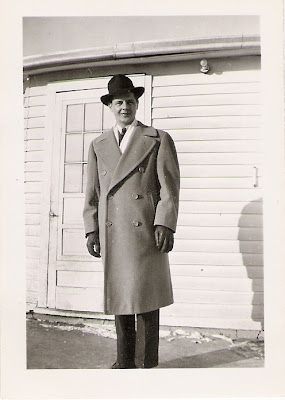 Isn't Grandpa natty in his winter coat and fedora? This must have been a special occasion. He even has a white scarf tucked around his neck! 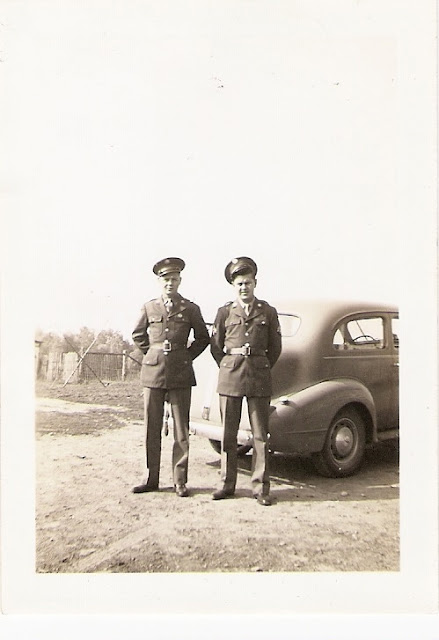 Here he is a few months later with one of his brothers. We think this was probably taken when he was on leave before being shipped over seas.
After serving in the Army, being wounded several times, Grandpa became a carpenter and settled in Chicago to raise a family. Even though he was not the easiest person to always get along with, like his mother Anna, he had a deep sense of family duty. Not just duty, but clannish-ness, a stick-together-through-thick-and-thin-always-there-for-each-other-ness. The highest praise his sisters could give was"he was the best brother". I am glad to say, it is becoming a family trait, passing down through the generations. 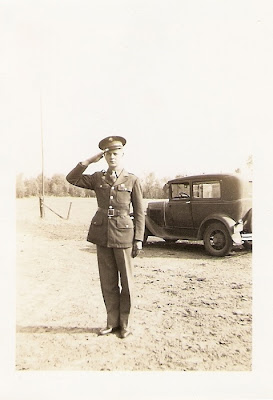 Posted by Heide at ApronHistory at 1:14 PM 5 comments:
Email ThisBlogThis!Share to TwitterShare to FacebookShare to Pinterest
Labels: 1940s, family, photos 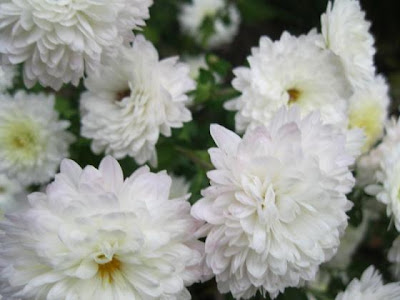 With the current trend of all white rooms, I have been giving a lot of thought to White as a color. I am even thinking about painting my new bedroom white! My blogging friend Dru decorates so beautifully with white and small pops of color. I really love the look, but can't imagine it in everyday life. But White is so crisp and clean and goes with pink perfectly! My sister refuses to wear white, she hates the stress of thinking she is going to stain it. And the other sister considers it a non color, only suitable for accents.
Besides contemplating white for my bedroom, I also have been thinking about it in the bathroom. I love the clean look of all that sparkly white! For some people I know that is a bit too much, but I like to SEE that my bathroom is clean! My current bathroom, before I re-did it never felt clean. It probably had something to do with the carpet on the floor. Yick! 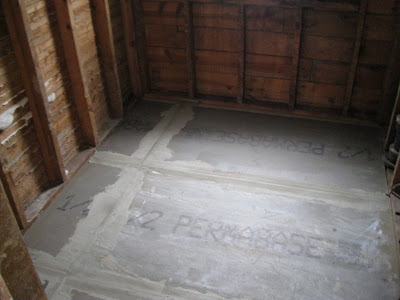 My new bathroom still looks like this. Not much progress lately. Though we did get the cement board laid. But that is not stopping me! I am busily dreaming what it will look like when finished. Want a peek at my inspiration?

Traditional Bathroom by Glenside Design-build Whitefield & Co, LLC
This is what I am envisioning my new bath to look like, minus the wall tile. I have a rounded pedestal sink picked out and a wonderful old wood medicine cabinet bought from craig's list. I will even probably paint the walls a light blue/gray. The floors will be slightly different, similar white hexagon tile but with black tiles in the centers.

Traditional Floor Tiles by Other Metro Home Depot
I already had bought my tiles, then I went to a discount home supply store...... and fell in love with these little hexagon tiles!
In person they are so much cuter! I can't wait to see how they look. In the mean time, the first tiles are going back to the store......

This post is part of the Country Whites Weekend!
Posted by Heide at ApronHistory at 12:08 PM 6 comments:
Email ThisBlogThis!Share to TwitterShare to FacebookShare to Pinterest
Labels: decorating, house

Most Marvelous Meals with Minute Tapioca 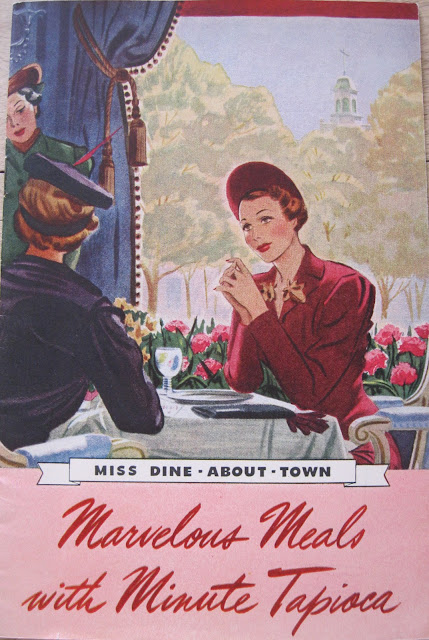 I had forgotten about this little gem until the other night when I made tapioca pudding. Good thing I wasn't really planning on sharing pictures, it was a flop! I ran out of tapioca and it didn't firm up right. The cover is what caught my eye, isn't it pretty? Her expression makes me laugh. Judging from her ensemble this little booklet is from the late 1930s. 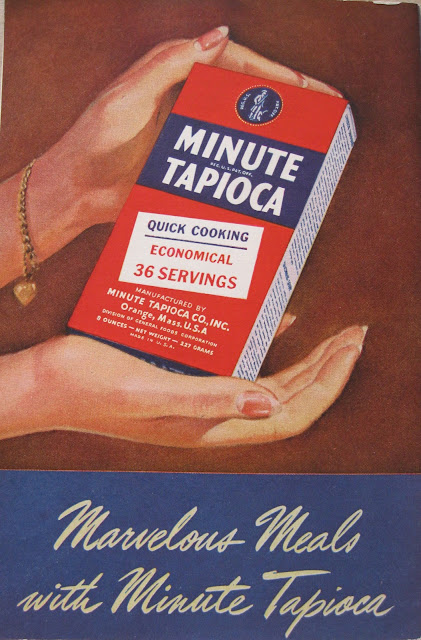 There are recipes for everything with tapioca! Meatloaf, gravy, ham loaf, potpie, soups, souffle, puddings, pies and ice cream. They were very inventive. 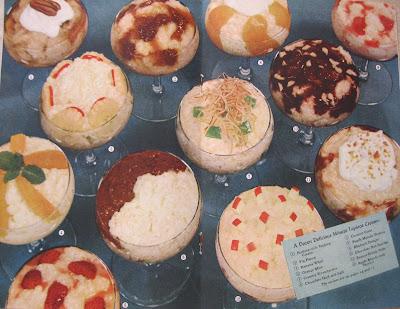 Such a colorful picture. I love how simple ingredients like fruit and nuts are used to add a special touch to pudding. 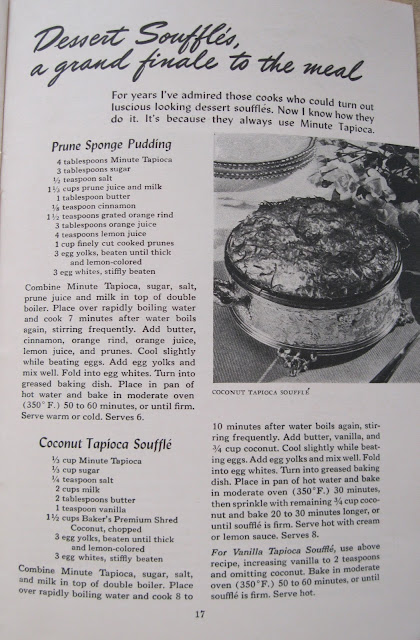 I have always wanted to make a souffle, haven't you? From watching Audrey Hepburn in Sabrina to often. Such an old fashioned dish. I haven't gotten up the courage yet.﻿
Posted by Heide at ApronHistory at 11:37 AM 3 comments:
Email ThisBlogThis!Share to TwitterShare to FacebookShare to Pinterest
Labels: 1930s, Cookbook Project, cooking 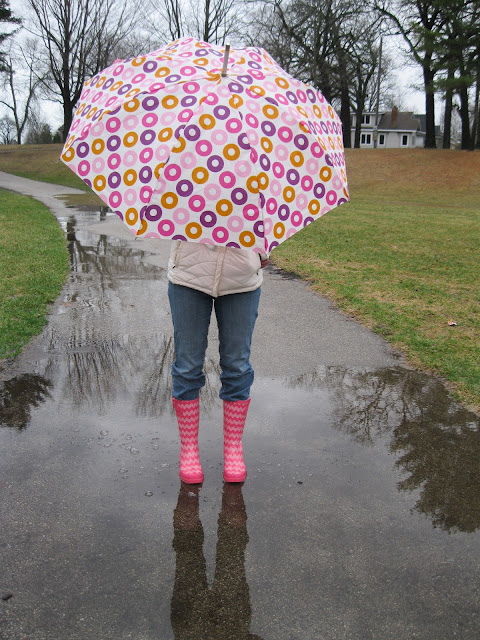 Don't you love how well my umbrella and boots match?
Hopefully all these April showers will bring May flowers! It has been raining for almost a week straight here. There isn't much one can do when it is so gloomy and wet,
except Sing in the Rain!!
Spring comes very slowly here in southeastern Wisconsin. The days start to get longer, one might see a robin or hear a cardinal singing and the air feels spring like. The snow melts, brave daffodils start popping up, then all of the sudden the grass is green, the forsythia, daffodils and tulips are blooming! And even though we still have to wear hat, mittens and coats we know Spring has sprung! 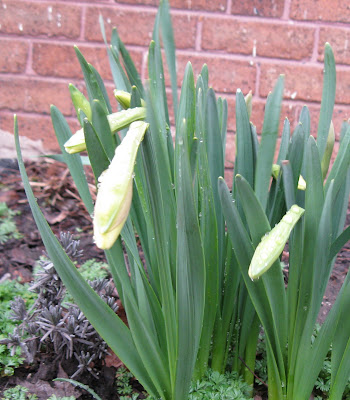 At the moment we are still at the snow-is-gone-and-the-daffodils-are-poking-up-stage, but any day now and the flowers should all be bursting open! 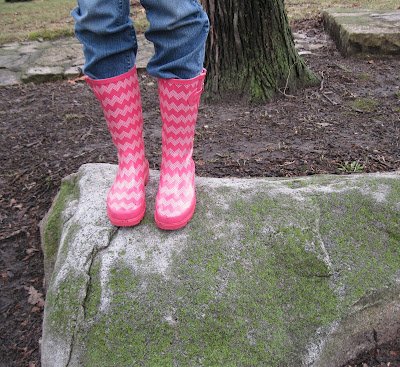 We get a little antsy for Spring. If it is too slow, we have to help it along by celebrating with out it! Like painting one's nails or buying bright new wellies or picking up a pot of daffodils in bloom at the garden center or knitting the brightest colored sweater possible. 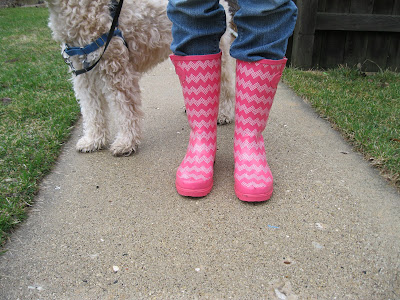 What do you do to celebrate Spring? With or without it!
Posted by Heide at ApronHistory at 1:04 PM 3 comments:
Email ThisBlogThis!Share to TwitterShare to FacebookShare to Pinterest
Labels: movies, spring 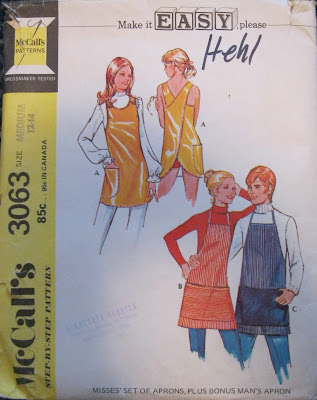 This really isn't my new pattern, but my sister's. I talked her into letting my borrow it to share here. I love version A. Can't you envision it in a colorful floral? Or even a gingham? 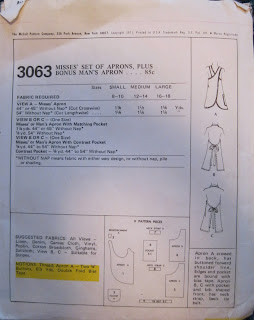 I had to share the envelope back too. Some of the details are hard to catch. Did you notice the straps button on top of the shoulder?
Copyright 1971. McCall's is always so helpful about putting the copyright on their patterns.
I can't wait to try this pattern out! But I don't know when it will happen....... I have a one track mind right now..........House!!
P.S. I apologize for last week's lack of posts, very busy week at work.