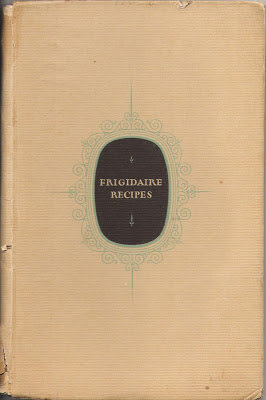 I am not sure if this little book was published to promote sales or was the owner's manual that came with the refrigerator. But it is fascinating to look at! I picked up last time I was antiquing. It was my big splurge, just too cute to pass up. 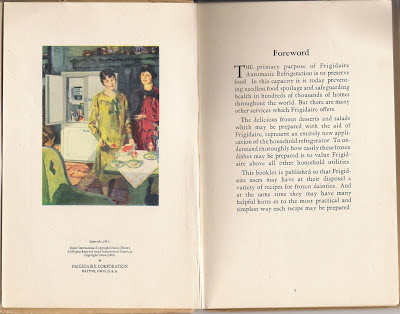 I love this first picture of 1920s ladies and their refrigerator.
"The primary purpose of a Frigidaire Automatic Refrigeration is to preserve food." 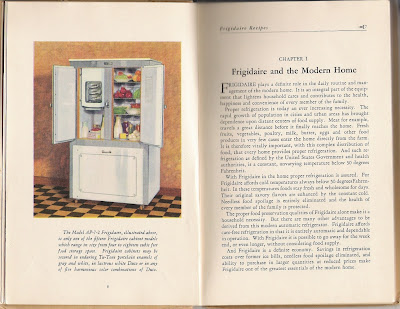 Frigidaire and the Modern Home
"Frigidaire plays a definite role in the daily routine and management of the modern home. It is an integral part of the equipment that lightens household cares and contributes to the health, happiness and convenience of every member of the family."
﻿ 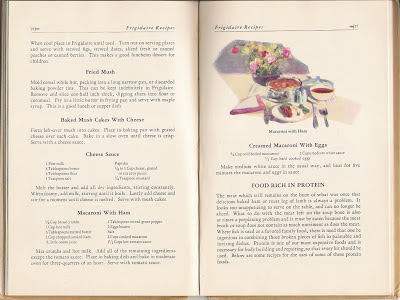 Aren't the little illustrations lovely! Even though it is just illustrating a ham casserole, it is elegant! 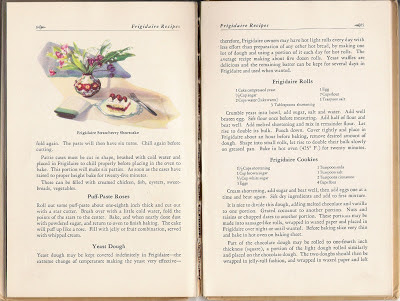 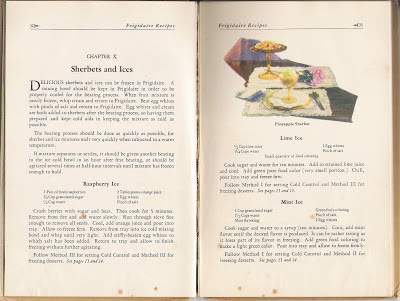 And would this cookbook be complete without Sherbets and Ices? 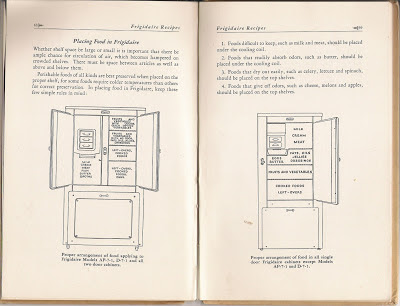 I thought this was fascinating, a diagram of where to keep food.
"Whether shelf space be large or small it is important that there be ample chance for circulation of air, which becomes hampered on crowded shelves. There must be space between articles as well as above and below them.
Perishable foods of all kinds are best preserved when placed on the proper shelf, for some foods require colder temperatures than others for correct preservation. In placing food in Frigidaire, keep these few simple rules in mind:
1. Foods difficult to keep, such as milk and meat, should be placed under the cooling coil.
2. Foods that readily absorb odors, such as butter, should be placed under the cooling coil.
3. Foods that dry out easily, such as celery, lettuce and spinach, should be placed on the top shelves. 4. Foods that give off odors. such as cheese, melons and apples, should be placed on the top shelves."
Doesn't it make you thankful we don't have to worry about "difficult to keep foods" anymore? We just have to worry about forgetting things in the refrigerator!

Posted by Heide at ApronHistory at 1:35 PM
Email ThisBlogThis!Share to TwitterShare to FacebookShare to Pinterest
Labels: 1930s, Cookbook Project, cookbooks