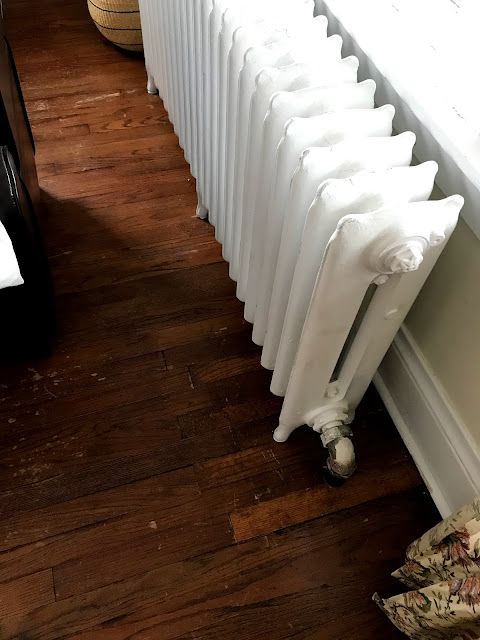 Hello Friends! We are all well. I haven't been motivated this winter to blog. And everything going on in the world didn't help motivate me either. But the sun is shining, we are getting back to normal and things are looking up! I hope all of you are well.
Today, I am here to talk about patching floors. And in this case, patching old cold air returns. True to 1920's science at the time, the cold air returns were huge!
First, I will briefly mention the cold air return in the picture above. My brother did this one so I can't take credit. But I did watch carefully and that gave me courage to tackle the other two! This cold air return was also a lot smaller as it was a later edition. I suspect it must of been cut in the late 40's/50's when the heating system was updated. 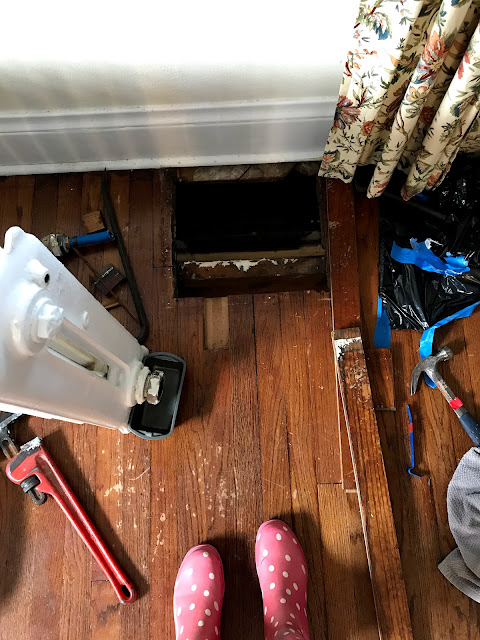 Not so large at all! 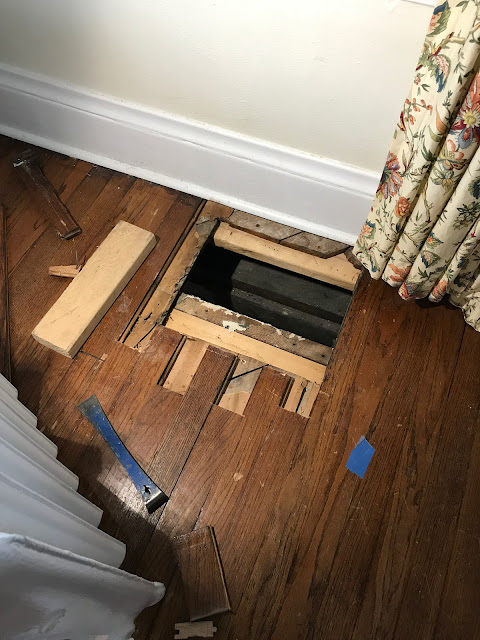 Before the sub-floor was patched, but after the floor boards are cut back. 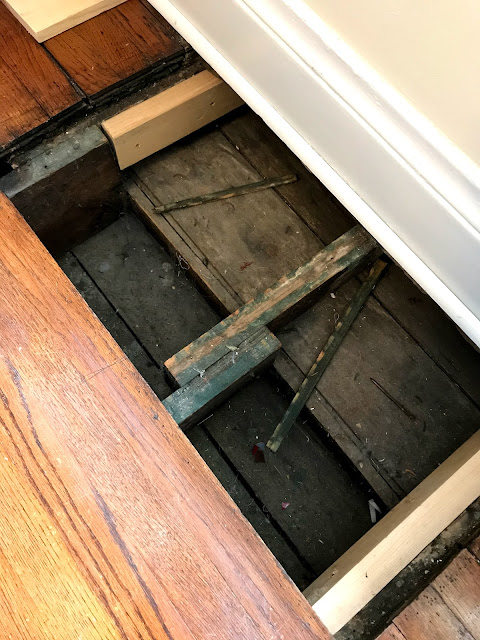 This is the dining room cold air return. Inconveniently placed just behind the dining room table. (And yes, we had a couple of incidents of chairs legs getting stuck in the grate and people suddenly falling off their chairs.) We were glad to see this one go!
Mandy and I added a couple of new blocks on the edges to make sure the subfloor would be stable. In the photo above you can also see that part of this area has a decided tip. It is a small window bump out. And given that it is a few years shy of 100 years old, a bit saggy. Which made it a little tricky getting the new plywood sub floor mostly level! 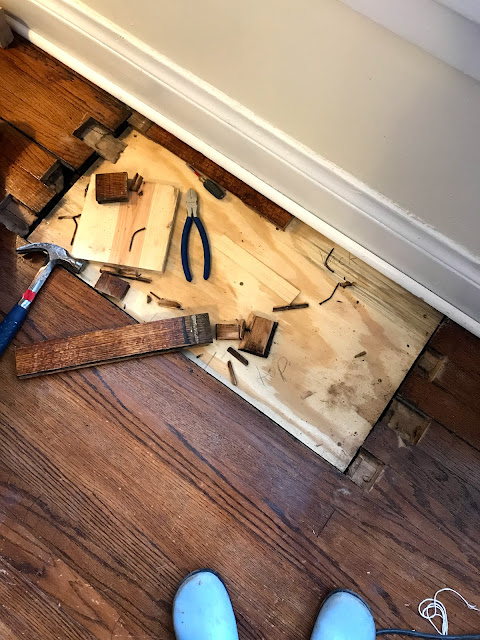 We finally got approximately level. Then the next step was cutting back the old floor boards to "feather" in new. As you can see, the "new" boards match almost perfectly! I raided my older brother's stash of old flooring and after a good clean, the boards blend right in! That is one advantage of using the same shellac finish as old flooring! 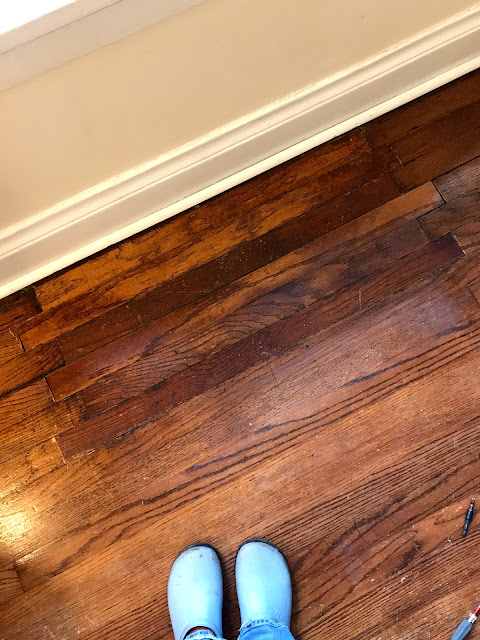 And after a bit of hammering, screwing and cutting, the new boards are in! On this patch we were lucky as the tongues were facing toward the wall. Which means we started laying the boards from the front edge of the hole to the back. And the last board is held in place with a couple of face nails or nails through the top of the board. 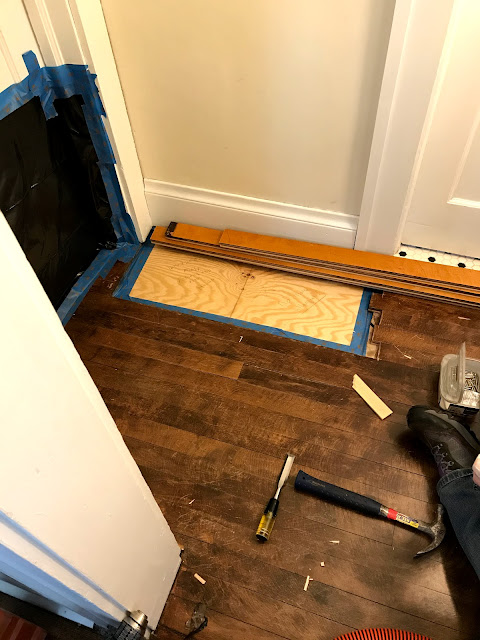 Naturally, the cold air return across the room in the hallway was quite as easy.....
For one thing, the tongues go the other way, meaning we had to start at the wall and work out from there. But first I had a little trouble locating a couple of old maple floor boards. Our local salvage place was out, the older brother didn't have any the right width... finally I discovered my brother-in-law had a stash! Yey for family members that are also into old houses!! 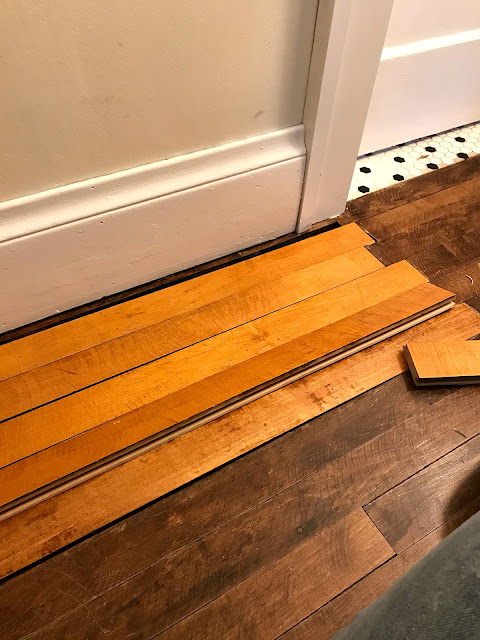 One tool I would highly recommend for a project like this is oscillating multi tool saw. Very neat tool! It is a little hard to cut super straight when cutting straight down with a vibrating tool, but a lot neater than a hammer and chisel.
Once the old boards were cut back, new boards cut to length we were ready to screw in the boards. That is when we discovered we should be working from the wall out! Opps! Just a few screws to unscrew and we were headed in the right direction. All went good until we got to the last board next to the old floor. The tongue on the old flooring was also ready cut off , so that was good. But the new board was warped and refused to go in it's place. (Even when boards aren't warped it is tricky getting the last board in place!) So we unscrewed the next to last board, wedged the warped board in place and screwed it down and then put the next to last board in. Except it was a close call..... We hammered and wedged and pushed for all we were worth and it would not go! We scraped and chiseled edges and it still would not go. Mandy and I just kept banging away and just about the time we were going to give up, it popped into place!
I told Mandy to sit on it while I ran to get the trim nails! We did not want it to even think about coming out! 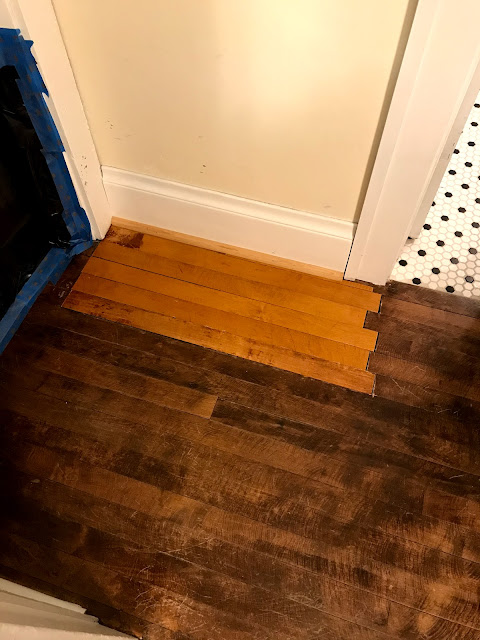 This one was a bit odd to feather in. At the one end is my bedroom door, so couldn't go that way. The other end is the bathroom door way. And since I am not 100% sure how well I am going to get the old and new to blend I didn't want to feather into the doorway.
So I ended up only feathering an inch or inch and half. It still turned out really well! So I am happy!
The next project is to try and figure out how to blend the old and new. The old floor is maple. It was covered with 1940's linoleum when I bought the house. After pulling up the linoleum, we used a steam mop to heat the black tar/glue stuff to get it off. The heat and steam opened the pores in the wood and allowed it to take up stain. (Normally maple is notoriously hard to stain! But I didn't know that!) I am not sure I can replicate that whole scenario on the new boards.
But I will keep you posted!